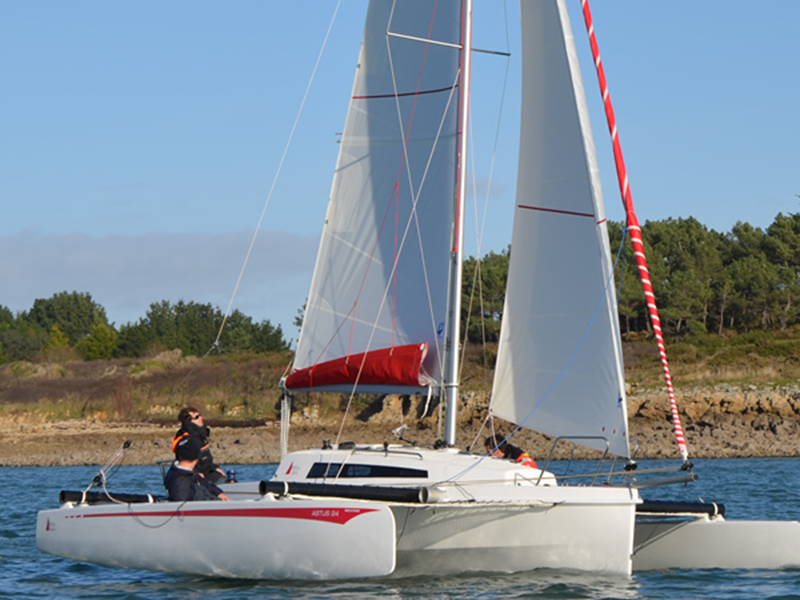 Founded in France in 2004 by present day owner, Jean-Hubert Pommois, Astus Boats was created to offer an innovative alternative to existing sailing yachts and boats available on the market at the time. To this day, the Astus Boats principles centre around achieving fantastic sailing performance whilst also delivering practical solutions for short-handed rigging and sailing, easy towing as well as low cost of ownership.

A Brief History
The Astus concept was first executed in the form of the Astus 20.1 trailerable trimaran which, following the development of several prototypes, went into production in the Summer of 2005. During the first year 7 boats left the Astus Boats boatyard and today 73 of the 20.1 models are sailing in France and further afield.

Following the success of the 20.1, Astus Boats launched two new models, the Astus 16.1 (32 boats built) and the Astus 14.1 (27 boats built), whilst expanding their production capabilities during the next two years.  In 2008, following critical acclaim, Astus Boats developed a distribution network, both in France and abroad, and introduced a new model in the range – the Astus 22 – of which 37 have been built. At the time of the 2009 Paris International Boat Show, Astus Boats presented a new generation of its 20 foot trimarans, the Astus 20.2, designed by Philippe Roulin (Perspective Yacht Design). Astus further enhanced its polyester manufacturing capabilities, going on to produce a total of 112 examples of the popular 20.2 model. During 2010, the first day-boat of the range appeared in the form of the new Astus 18.2. Often called “little brother” of the Astus 20.2,  37 Astus 18.2 trimarans have been built.

In 2011, Astus Boats took further control of its production standards and responsiveness by integrating the polyester manufacturing of hulls in-house in a new production unit in Brech, Britanny. All production and tools are now produced in-house. 2012 was a transition year with the release of more specialised versions of the Astus 20.2 (infusion shell, carbon mat) and the development of the its polyester workshop to incorporate infusion technology.

In 2013, Astus Boats made its first foray in the motor boat market with the introduction of the Bay Dream 5.5 hybrid, a simple, low cost boat, which serves primarily as a leisure platform. This was followed in 2014 by the launch of the flagship of the Astus range, the Astus 24. Designed as more of a cruiser than previous  models, this boat was nominated for the European Yacht of the Year 2015 and opened the international market for Astus boats.

2016 saw the start of the current of collaboration with famed architect firm, VPLP, launching Astus Boats into a new era of even faster and more modern boats.  The exciting Astus 16.5 was the first result – a new improved model with a more contemporary shape and a sportier line, coupled with harmonious curves and narrow water entry. The second boat of the VPLP range, the Astus 20.5, followed in 2018 – the model ushered in a new generation of the 20.2 and has already proved exceptionally popular, selling over 120 examples to date.

Today, Astus Boats goes from strength to strength. More than 400 Astus boats can be found around the globe, with satisfied owners stretching from Europe, USA, New Zealand and even Perù. Astus Boats is maintaining a fast pace of development, including leading edge designs and carefully controlled production at its head office site in Britanny, France. Having agreed to support the distribution of these innovative trailerable trimarans in the UK, Boats on Wheels is excited to introduce these high performance trailer sailers to its British customers.

In 2021, following the disruption caused by Covid 19,  Astus Boats plans to launch a new project, the Astus 22.5.  Also designed by VPLP, and in the same spirit as the Astus 16.5 and Astus 20.5, the new 22.5 promises to introduce foiling technology to the Astus range for the very first time. More about this exciting model soon!

Find out more or adjust your settings.